The History and Lineage of the Chappells in America 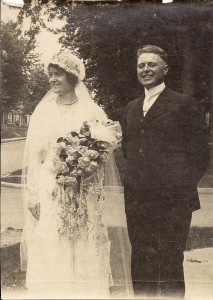 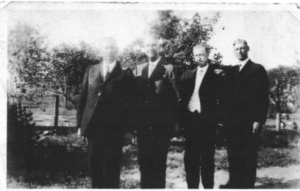 X          Chappell, Moses Lane, born April 24, 1822 in Indiana.  Married Nancy Lee Freeland; died August 13, 1886.  Moses Lane Chappell married Nancy Lee Freeland (who was born May 10, 1827 in Daviess County, Indiana, and died on April 30, 1912, in Lincoln, Nebraska) on August 6, 1846, in Algiers, Indiana.  Prior to his marriage to Nancy, he had been married and had a girl, Demeretta Elvira, who was born September 18, 1843.  Together, Moses and Nancy settled in Pike County, Indiana, and raised ten children in addition to a pair of twins that died at birth:  Demeretta Elvira, Adeline Ovanda (born January 31, 1848), Rachel Elizabeth (born October 2, 1849), Mary Ann (born November 4, 1851), Milton Simpson (born July 9, 1853), Deamphard Silsbury (born February 10, 1856), Martha Ann (born September 25, 1859), Moses Ellsworth (born February 4, 1862) James Franklin (born February 16, 1867), and George W. (born April 7, 1869).  Moses was 6’ 1” tall and served in the Civil War from September 24, 1862, until June 4, 1865.  He was First Sergeant of Company I, 8th Indiana Infantry.  He was promoted to 2nd Lieutenant on May 1, 1865, but was discharged before taking the oath as an officer.  His son-in-law, James Leonard Loudon, who married Adeline Ovanda, also served in the Civil War, in Company F of the 8th Indiana Infantry, which was a part of General William T. Sherman’s army, and which helped to rebuild the bridges and roads that had been destroyed during the March to the Sea.  Moses’ brother Job was born on November 9, 1812, and married Appama Brenton on October 5, 1828.  He was not quite 16 years old, and she was just past 13 when they married.  They had fifteen children.  There is a family story that on one spring day in 1833, some people who were moving from Perry County, Indiana to Illinois stopped near Job’s and Appama’s cabin to eat lunch.  One of the older men, Thomas Lincoln, was watering his cattle at a nearby pond when he noticed water seeping out of the ground.  He began to dig, and soon a clear stream of water spouted out.  Job called the spring, “The Lincoln Spring.”  Later on, Job built a fence around the spring for protection and it was a source of water for their family.  Several years later it was found contaminated at about the same time there was an epidemic of typhoid fever in the area, so it was condemned and filled in.

IX        Chappell, Jacob, born in NC about 1784; moved to Indiana in 1813; died April 25, 1846.  Jacob Chappell was born in Perquimans County, North Carolina, around 1784.  His wife, Rachel Lane was born about 1776 in North Carolina and married Josiah Rogerson in 1799.  They had three children:  Solomon, born in 1801, Anna, born in 1804, and Mary (birth unknown).  After the death of her first husband, she married Jacob Chappell on February 13, 1809, in North Carolina.  They had several more children before moving to Pike County, Indiana in 1913:  Joab, Nancy, Elizabeth, and Job (born November 9, 1812).  The family took more than a year to make their trip, and as they passed through the Cumberland Gap, they camped and stayed long enough to raise and harvest a crop.  In Indiana, they had several more children:  Jacob, born in 1816, Moses Lane Chappel, born in 1822, and Esther, born in 1828.  The family settled north of Otwell in Jefferson Township, and there Jacob found success as a farmer.  Jacob died in 1846, and his wife Rachel died in 1868 at the age of 92 in Pike, Indiana, and they were buried in the Chappell Graveyard, one mile north of Otwell, Indiana.

VIII     Chappell, Job, born, lived, and died in Parquimans County, North Carolina.  Birth and death dates for Job Chappell are unknown.  He married Leah Bond, and among his children were three boys, William, Joab, and Jacob.  Job Chappell’s name appears on the tax list and on the first census taken in North Carolina in 1790, at which time he had three children and several slaves.  His name does not appear in the list of colonial soldiers at that time from North Carolina.  Many of the prominent and well-to-do families along the coast at that time were Tories, staunchly loyal to England.  Joab Chappell and his family moved to Indiana in 1810, and his brother, Jacob, followed him in 1813.

III        Chappell, John Thomas, Captain of the ship Speedwell.  Born in 1588, died about 1660; married to Mary Thomas.  Captain John Thomas Chappell was the owner and master of the ship Speedwell, a sister ship to the Mayflower.  The Speedwell developed a leak and could not make the voyage with the Mayflower, but did sail May 28, 1635, from Southampton for the colony of Virginia.  He was the son of Sir Robert Chappell of Nottinghamshire, who was prominent in England in the 16th Century.  Captain John Chappell sailed from Southampton on May 28, 1635, on the Speedwell and settled near the mouth of the James River, near Newport News, in what is now Warwick County, Virginia.  He had several children:  Thomas Sr., who sailed aboard the ship America on June 23, 1635 at the age of 23, and settled at Chappell Creek which is approximately 30 miles from Jamestown, Virginia; Samuel, who received a land grant in 1664; and Zachariah Chappell, who received a land grant of 175 acres in Denbigh Parish, Warwick County, Virginia, on April 26, 1684.

The Pilgrims on the Speedwell 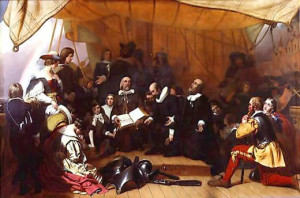 According to some sources, the family progenitor of this family in England accompanied William the Conqueror during the Norman Conquest in 1066, and settled on land (Copinore—the Manor of Portishead) given to him as a reward for his services.  This is detailed in medieval parochial record.  Thomas and Martha Chappell moved to Keynsham, near Bristol in 1605.  Families bearing the Chappell name were residents of the English counties of Nottingham, Somerset, Northumberland, York, Middlesex, Cambridge, Devon, and London.  They appear to have primarily been land gentry and yeomen of the British Isles.

The name Chappell is believed to be of French origin and to have derived from the residence of the first bearer “at the chapel.”  It is found in ancient records under the various spellings of Chapel, Chapele, Chapple, and Chappell, which is the most commonly used in America.  The name was frequently used in earlier times with the prefixes de la, a la, and del, which were gradually dropped.

Other sources include information that is available on ancestry.com, rootsweb.com, and at other websites noted below:

For more information on the Pilgrim Ship Speedwell, see: