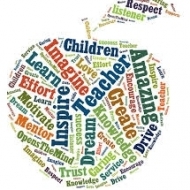 After college Charlotte returned to Omaha where she soon met William Manton, from Albany, N.Y., who was in Omaha visiting army buddies. They were married in 1947 and lived in East Orange, N.J. and Grand Island, before returning to Omaha in 1956 with their five young children. In 1961 they moved to Lincoln.

Even as a mother of five young children Charlotte found time for community activities. She gave swimming lessons to disabled children, was a den mother, campfire girls leader and school volunteer-anything having to do with teaching children. She loved spending summer days at the pool with her kids, returning home for dinner at the picnic table on the patio, where she joked she could clean up by just hosing things off.

When Charlotte returned to college at age 45 to get her teaching certificate it was a turning point in her life. At UNL she learned innovative teaching methods and became very interested in educational psychology. She took a position teaching social studies at Mickle Junior High in 1967. She loved her 8th graders, saying that at that age she could have the greatest impact on their lives. She taught at Mickle until she was 65, when she took a position as interim Social Studies Consultant at Lincoln Public Schools Administration and later developed and wrote curriculum. LPS honored her with a special award for her work developing the Student Vote Project and as author of third-grade textbook on the history of Lincoln.

Charlotte was always politically active, campaigning door-to-door or on phone banks, but her real dedication was to Common Cause Nebraska, serving as a board member, President and as State Governing Board Chair from 2001-2009. In retirement she also volunteered as a tutor for LPS and Lincoln Literacy, and as a speaker for TRIAD.

Charlotte was always a traveler. She explored all 50 states and Mexico and made many trips to Europe including a bicycle trip through the Loire Valley when she was 70. She loved the Nebraska Pine Ridge and the Sandhills but her happiest times, from childhood to old age, were spent at Canon Beach in Oregon.

A celebration of Charlotte’s life will be held in late April. In lieu of flowers, donations can be given to Common Cause Nebraska and the Crane Trust.

Charlotte’s family wants to give special thanks to the loving and wonderful staff at Country House on Old Cheney, who did so much to make Charlotte’s last two years happy and comfortable, and gave so much support to her family.